Smoke-free areas on The Parade, Norwood.

Smoking will be restricted on The Parade (between the eastern side of Osmond Terrace and western side of Portrush Road) as of Saturday 1 December 2018, in the following areas:

Please note adjoining side streets off The Parade are not designated smoke-free areas. 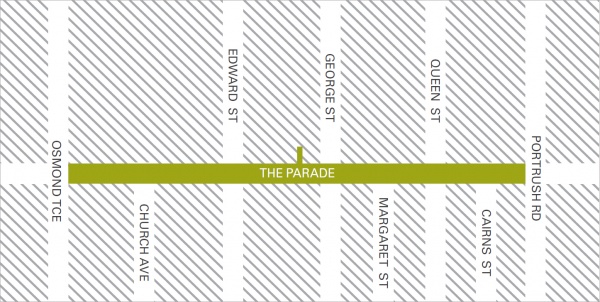 Signage has been installed on The Parade, at entry points and in prominent positions, to show the area where smoking is prohibited.

A number of butt bins will be installed on adjoining streets to The Parade, to allow for the responsible disposal of cigarette butts.

The Council does not intend to issue fines under the Act; instead it has opted to take an educational approach to this initiative. Signage will be displayed on The Parade to show the area where smoking is prohibited.

In early 2018, the City of Norwood Payneham & St Peters lodged an application with the Minister for Mental Health and Substance Abuse to permanently designate the section of The Parade between the eastern side of Osmond Terrace and western side of Portrush Road as a smoke-free area under Section 52 of the Tobacco Products Regulation Act 1997.

This application was successful with the Minister granting approval to prohibit smoking on this section of The Parade as of Saturday 1 December 2018.

For more information about the restrictions, please contact the Economic Development & Strategy Unit of the City of Norwood Payneham & St Peters Council on 08 8366 4555.